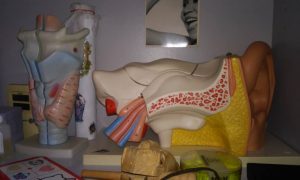 I have already told you about my dear student who gave my work and its results the snappy title “The Julie Effect”. He came to me and trusted that I could help him and I could.Worried about his professional voice, which was his livelihood at a big music station, he came to me, dejected but with hope (in my abilities). And when he left my classroom, the worry lines were less and he was beaming. Full of confidence. He was no longer afraid of losing his job and doing what he loved. I could help him, also because he saw something in me that I couldn’t see then. We had only a few hours together, because I moved to another city soon after he arrived at my place. He was my first official student whom I helped with the speaking voice. I did not offer that at the time. I am grateful to him to this day. Because he recognized something in me that had and still has value for him.Believing in someone and believing in something is powerful. More powerful than one might sometimes think. As a Third Culture Kid, raised and socialized in Germany, USA and England, I was allowed to learn “believing in people” early, because this “thought”, let’s say, is not so rooted in the thinking and acting of a German speaking socialized person.Not only said TV anchor helped me with his belief in me, many many times, I learned through others ‘believing in me and my abilities’ help.

When I started to study applied vocal physiology again in 2004, I liked a lot that it was very concentrated on looking at the voice system, how it works, what possibilities it has and I quickly realized: it is a very flexible and forgiving system. I just had to learn to read it and listen to it.

When a young woman came to my studio a few years later, I didn’t know that the pretty, reserved, loving person standing infant of  me would show me how important this attention to “believing in people” and systems is.

She came in overworked, discouraged, crushed, uncertain and anxious with her shoulders drooping and her eyes downcast. I asked her several times if she could look me in the eye. She was a trainee teacher, had moved to Germany relatively recently, came from Portugal and had a large active German vocabulary and an even larger passive one. She was teaching. She was insecure and experienced a lot of criticism. The children were very restless in her presence and it stressed her out. Her wish, why she came, was to be able to sing, just for herself, or some day in a choir. In her family they sang and she was laughed. Because she sang “wrong”, she told me.

When I then began to work with her, I quickly realized, not only was the nervous system in front of me shaky and unstable, she virtually hit no note. Inwardly, I stopped and asked myself if I could do it. And I said to myself: I’ll just stick to the physiological facts and go step by step.

Long story short: in two years we succeeded in taking the small steps of applied vocal physiology step by step with my faith in them and in their system. Because systems want to work!

During this time the almost unbelievable happened: not only did she get better and better at hitting the notes, but at the end of this time she was able to realize her greatest wish, to sing a jazz standard. And she sang Girl from Ipanema (in Portuguese, of course) wonderfully, sweetly and absolutely in tune!

This should not have been the last one either. She had become a tone-hitting, subtly interpreting amateur singer. And only because I believed in her and in the function of her system in general. That was her gift to me, I was allowed to experience this transformation.

Today, after many such examples, I can say: I believe in it. Because I know. I have been there. It was a gift for both of us!

So she left my class with a straight, upright posture, a look into the future, bright, uplifted eyes, her enchanting smile and a lot of courage! The interaction with her students had also changed, she reported, they were no longer so loud and disruptive, but listened to her and were engaged. Her position also changed in other relationships, she reported more respect with others, especially with her boyfriend at the time. I saw her again sown town a few years later. It was a cordial meeting and she was still beaming. Now not only when someone asked her not to lower her eyes. She looked happy.